Yeah alright. I've already succumbed to doing one of those video list articles. I had a wee think on the train home about what to write and something struck me afresh as I listened to Desert Island Discs archive podcast.

(Yes I'm still wanging on about Desert Island Discs and, full disclosure, may well continue to do so.)

The 'tears of the clown' could be dismissed as a stinky stale old cliche but it exists for good reason and listening to  Johnny Vegas and Frank Skinner talking candidly about their pissed-up problems between records reminded me that those who make us laugh can all the quicker make us cry. 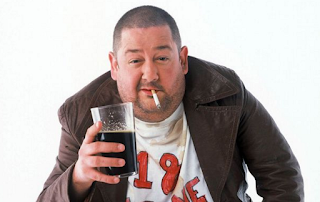 Perhaps it's because like many creative folk (and despite some unconvincing protestations) comedians are usually sensitive 'outsiders' who, despite a childhood of wanting to belong, can never quite hop over that observation line. That acute but lonely perception creates a tinge of tragedy around what becomes great work - the child who wasn't picked to play notices much more about the game from the sidelines.

But also as an comedy audience, we're more emotionally vulnerable than we are with any other genre. Our stress-tightened chests open up after a few laughs and we're giddy to be carried along by a comedian. We roll over and want to be tickled, leaving our soft squishy bellies exposed. So when they carry us somewhere unexpectedly dark, sad, or sentimental it's all the more shocking. We're have no stoic reserve to protect us.

It's those sad comedy bits that make your dad pretend to blow his nose to cover that he's tearing up.

Here's a brief list of some 'when funny goes sad' moments that immediately came to my mind. If you have other suggestions please let me know below.

Will's deadbeat dad turned up after 14 years only to swiftly take off again, leaving Will struggling to keep a lid on his frustration and vulnerability.

There was an urban legend that the second half of the scene was unscripted and it was the actor Will Smith talking and not the character Will Smith. Well, that's plainly horseshit. What is true is that Will's cap was not meant to come off but the director could not and would not ask for another take.

Despite being a little 'HERE'S A SERIOUS MOMENT' for my liking, it still packs a powerful punch.

Hands up, this one is not much of a tear-jerker but it was a comedy moment that completely sideswiped the audience and me watching at home (hear the nervous giggles as they wonder where this is going).

For much of the episode hapless boyfriend Gary is convinced that Dorothy is having an affair. He bungles a surveillance operation and confronts Dorothy with the evidence. She rolls her eyes, he looks an idiot as usual and then....


I was hoping show you the moment Barbara fixes her dying mum's hair just as she had done for her as a child. As Norma sings 'Ce Sera Sera', Barbara tries to hold back the tears. 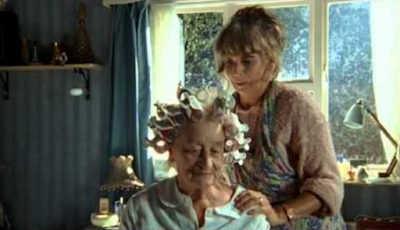 But that clip is not on YouTube so instead here's another touching bit from the same episode where Nana/Norma (played beautifully by the late Liz Smith) meets her grand-daughter.

From the same episode where a pocket-watch makes them millionaires (aka the one that should have been the last one ever), there's a raw emotional moment as Del Boy forces Rodney to confront his loss following Cassandra's recent miscarriage.

The Fast Show would not be your first stop for pathos but this sketch has more regret and sorrow than Dot Cotton sucking on a wet cigarette.

Paul Whitehouse's character Rowley Birkin QC's shtick was mumbled stories with only flashes of coherent words, always topped off with the flourish "I'm afraid I was very very drunk".

But in this final episode of Series 2 his drunken haze was not something to celebrate.

So much has already been written about how this series finale tumbled from production catastrophe to a television classic. I remember it as a complete let-down. At least it was to a seven year old.

The family watched 'Blackadder' as the farcical pantomime it mostly was. Baldrick did silly things and I laughed when the grown-ups laughed. Then the laughs stopped and the funny men ran to their doom.

'That's stupid!" I cried. My dad replied, "No. It's very good. You'll understand when you're older." He was probably holding back a tear at the time.


And if you want a happy-sad moment you just cannot beat the Office Christmas Special (2003). Forget 'Friends' with their 'She got off the plane!' moment, it could never beat 'She got off the M25'!