2017 has already proven bountiful for those of us who depend on Netflix for a bedtime hit of something to squint at for six minutes, believe you can follow just as easily with eyes closed and then wake hours later, confused on a pillow of dribble.

They've chucked up around 84 new releases this week and some, such as the entire 'Fresh Prince of Bel Air', are getting my couch-bound brethren very excited. Being a dark soul, I instead opted for 'The Woman in Black: Angel of Death'. 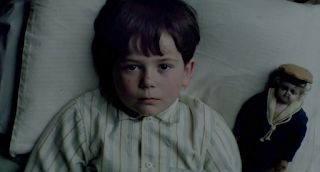 It's a sequel to the actually-quite-chilling 2012 adaptation of Susan Hill's novel/play and features the same Victoriana creepiness in a desolate house. This time it's set during World War II, a Miss-Honey-esque teacher is our hero, and a bunch of evacuated children are in the vengeful ghost's sights. 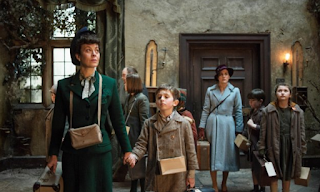 The sequel did not receive the same love at the box-office nor from critics but it is... fine. Sufficient. Like a triangle-pack sandwich in a Costa Coffee. The issue (shared by it's predecessor but felt acutely here) is that it plays with the same box of tired tricks until they're utterly worn through. Creepy dolls, creaking doors, flickering candles, movement in the shadows, someone's behind you, oh they've gone, orchestral pounding on shock-jumps etc.

But for me there was a bigger problem - the tone. 'TWIB:AOD' as ardent fans no doubt call it, is not just dripping but is utterly sodden with a cliched creepiness from the first scene and throughout. Everything is grey, dusty, crumbling, creaking. The music drones with dread under every scene. The characters are poe-faced horror fodder from the off. There is no levity. There is no contrast. There is no light to the shade. 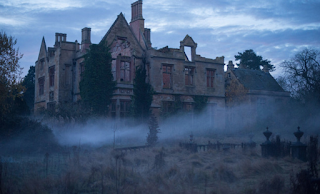 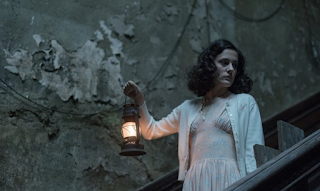 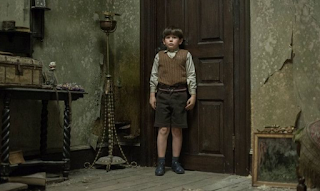 In need of a broom.

For me it's more unsettling when a horror film does not know it's a horror film yet. Far more disturbing if the terror strikes in a lovely, lounging, summer afternoon. More tantalising when the characters are blissfully oblivious to any potential terror.

Two moments spring to mind to illustrate my point -

In 'The Omen' the mother throws a birthday party for Damien. the kids, the wee antichrist included, are having a great old time. All are happy and secure on a bright clear and colourful day. Then the nanny calls to Damien from an upstairs window before committing suicide in front of all the guests. (I reckon it's so disturbing I won't post it but can be found here). 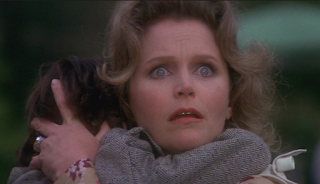 And in another 70s horror classic 'Halloween', Laurie gets a first glimpse of killer Michael Myers not in a eerily quiet dark alley or crumbling mansion but in broad daylight as she walks home from school with a friend.


Isn't it so much darker in the sunlight?

Really creepy horror doesn't announce itself with cobwebs, shifting shadows, and creaking doors. It erupts into everyday lives without warning, disrupting and destroying the safe story we tell ourselves about our world.

Nobody knows their life is about to become a horror. That's what's really scary.